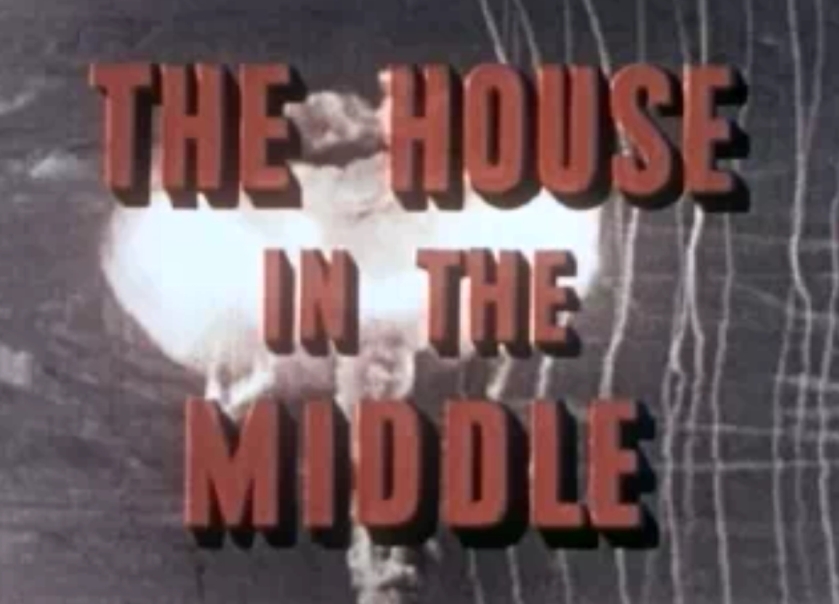 The Plot: Nothing says a 1950s short like Atomic Age paranoia, and “The House in the Middle” is no exception. Brought to you by the National Clean Up – Paint Up – Fix Up Bureau (the NCUPUFUB for short) and the Federal Civil Defense Administration (FCDA), the house in question is one of three standing as part of a nuclear bomb test in Yucca Flat, Nevada. Footage from the Upshot-Knothole Encore of 1953 shows that the houses on either side – untidy and deteriorating – immediately catch fire following a nuclear explosion, while the house in the middle – well-kept with a fresh coat of paint – survives. What can we as terrified Americans do? Why, keep our neighborhoods clean and our houses painted, of course! What an agenda!

Why It Matters: The NFR calls the film a “curiosity of the Cold War era” and then discusses the conspicuous participation of the National Paint, Varnish and Lacquer Association (NPVLA) in the making of this film. There’s also an essay by Kelly Chisholm, possibly the only Library of Congress employee with a degree in Chemistry.

But Does It Really?: America’s Atomic period needs to be preserved (and more importantly, remembered for fear of repeating), and “The House in the Middle” is a natural choice to represent the era. My one question: How did this make the NFR before the definitive Cold War short, “Duck and Cover”?

Somebody Gets One: This is another NFR film with no official credits, other than the organizations responsible for it. I just want to know who the narrator is. Did he work for the FCDA? And why is he so condescending towards my housekeeping skills? How’s your sterile SRO looking, buddy?

Wow, That’s Dated: Once more for the people in the back: this movie suggests that we will survive the next atomic bomb if we clean our yards and paint our walls. There is something simultaneously wholesome and terrifying about that message.

Seriously, Oscars?: Unsurprisingly, there was no Oscar love for “The House in the Middle”. For the record: 1954’s Best Documentary Short winner was “Thursday’s Children”, a Richard Burton-narrated film that taught the basics of lip reading.