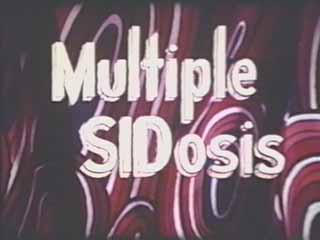 OR “Always Read the Instruction Manual”

The Plot: Amateur filmmaker Sid Laverents gets a reel-to-reel tape recorder for Christmas and immediately starts recording his ukulele. When he learns that he can overdub his recordings, he records the song “Nola” while playing a variety of instruments and singing a variety of vocalizations. The result is a 12-part one-man-band on film.

Why It Matters: The NFR cites its “multiple exposures and complex overdubbing” and calls the film “amateur but not amateurish”.

But Does It Really?: This is exactly the kind of film I wanted to discover by doing this blog. I had never heard of this film or Sid Laverents prior to viewing, but I am so glad the National Film Registry decided that my film education would not be complete without either of them. “Multiple SIDosis” is one very unique film and well worth a viewing. I don’t know why UCLA was determined to preserve this, but I definitely thank them for it.

Everybody Gets One: A few words on Sid Laverents; A former vaudevillian known for his one-man-band (naturally), Sid went on to be a sheet metal worker for 25 years as well as an aircraft repairman during World War II. He didn’t start making films until he was 50 and kept making them until his death at the age of 100. He lived long enough to see this film make it to the registry, one of the rare amateur films to do so.

Wow, That’s Dated: Weird organ Christmas music aside, the only dated part of this is the film’s other star; the Roberts 770x Reel-to-Reel Tape Recorder.

Seriously, Oscars?: Mainly due to this film’s amateur standing (and also in part because I don’t think it ever got a theatrical release), this film was not nominated – let alone eligible – for Best Live Action Short Subject. A real shame, because it definitely would have beat whatever the hell this is.

Further Viewing: Does anyone know anything about Sid’s other films? I’m looking at you, UCLA. You’re responsible for all of this.