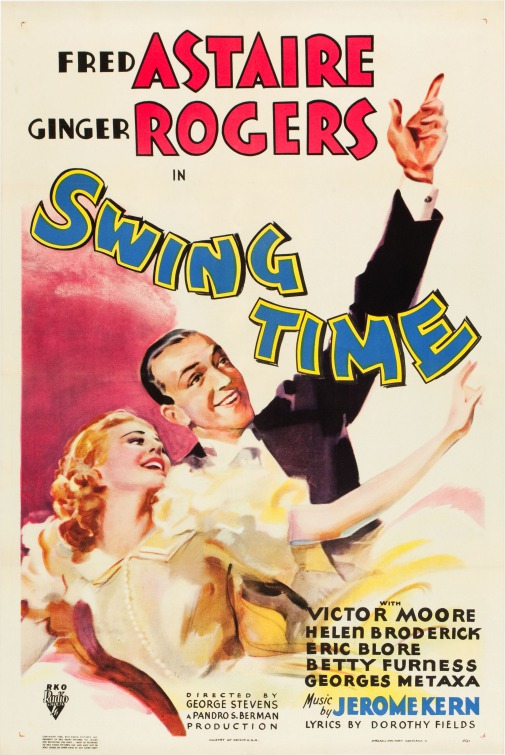 Written by Howard Lindsay and Allan Scott. Based on a story by Erwin S. Gelsey.

The Plot: “Lucky” Garnett (Fred Astaire) is a dancer with a gambling problem. After a broken engagement and a promise not to return until he’s respectable, Lucky ends up in New York with his friend “Pop” (Victor Moore). They meet dance instructor Penny (Ginger Rogers) and her sassy confidante Mabel (Helen Broderick) and…oh who cares? Fred & Ginger dance together and sing the Great American Songbook and it’s just great.

Why It Matters: The NFR calls it a candidate for “the duo’s best film” and gives praise to director George Stevens, composer Jerome Kern, as well as Astaire and Rogers of course.

But Does It Really?: Yes, with one big reservation (see “Wow That’s Dated” below). That scene notwithstanding, the film is an enjoyable, pleasant musical. Fred & Ginger compliment each other beautifully on screen and they’re still fun to watch over 80 years later. When they try to shoehorn in a plot things lose momentum (especially towards the end), but Stevens keeps things moving as best he can and creates a delightful film. Now if only we could get rid of that Bojangles number we’d have a bona fide classic, but I’m getting ahead of myself.

Shout Outs: No specific references, but a lyrical shout-out to the “March of Time” newsreel series in “A Fine Romance”.

Everybody Gets One: Most of the cast were Astaire/Rogers regulars whom we’ll see again in “Top Hat”. Though I’d like to give special mention to Broadway star Victor Moore and character actor Eric Blore, a.k.a. the voice of Disney’s Mr. Toad.

Wow, That’s Dated: Sure there’s a lot of ‘30s talk like “screwy dames” and “ducky”, but we’re not here for that, we’re here for the BLACKFACE WARNING. About 75 minutes in we get Fred’s “Bojangles of Harlem” number and Bill Robinson is nowhere to be found. If the number wasn’t painful enough, the next big scene takes place in Fred’s dressing room and HE KEEPS THE BLACKFACE MAKEUP ON THE WHOLE TIME. And the film was doing so well up to this point.

Title Track: Fred says the phrase “swing time” once right before the title number, almost exactly halfway through the film.

Seriously, Oscars?: Jerome Kern and Dorothy Fields won Best Original Song for “The Way You Look Tonight”. The film’s legendary choreographer Hermes Pan was nominated in the category of Best Dance Direction. That’s right, for a hot second in the ‘30s, the Oscars gave an award for choreography. Meanwhile we can’t even get a Stunt Coordination category now.

Listen to This: Before teaming up with Ginger, Fred’s dance partner was his sister Adele. While appearing on Broadway in “Lady Be Good” they introduced the standard “Fascinating Rhythm”. This recording features George Gershwin on piano, and is one of the rare recordings of Adele Astaire before she retired from showbiz.