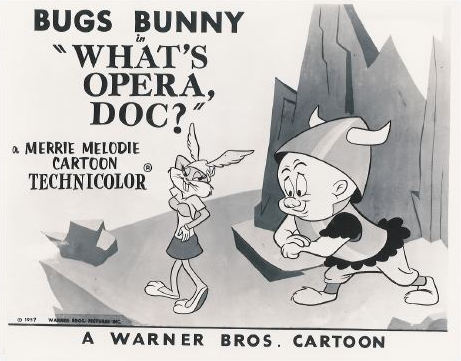 Not the full thing, but here’s the clip you need!

The Plot: After trying to best each other for 17 years, the longstanding Bugs Bunny-Elmer Fudd feud climaxes in operatic fashion. Taking a cue from Richard Wagner, Fudd (voiced by Arthur Q. Bryan) is Siegfried, who must “kill the wabbit” using his spear and magic helmet. Bugs (voiced by Mel Blanc) outwits the hunter by dressing in drag as Bruunhilde and seducing him. They sing, they dance, and they give most people their only knowledge of Wagner.

Why It Matters: The NFR hails it as “Jones’ cinematic masterpiece” and points out the film’s feat of being the first animated short to be included on the Registry. Also included is a loving tribute to Chuck Jones by his grandson, Craig Kausen.

But Does It Really?: Oh of course. This is the culmination of years of Chuck Jones honing his craft and creating two surprisingly dimensional animated characters. It’s as if all those other shorts were set-up and this is the payoff. Though in order to really appreciate “What’s Opera, Doc?” you should watch some of that “set-up” to get an idea of just how high the stakes are in this one (See “Prior Viewing” below).

Everybody Gets One: Due to what I’m guessing is a good agent, Mel Blanc is the only voice actor credited in any of these shorts. Attention must be paid to Arthur Q. Bryan, the original voice of Elmer Fudd, heard here in one of his final performances. Bryan was a longtime radio performer and voiced Fudd (and his predecessor Egghead) for 20 years.

Wow, That’s Dated: The assumption that an average audience has passing knowledge of opera.

Take a Shot: No one says the title, but Bugs does sing his trademark “What’s up, Doc?”

Seriously, Oscars?: No Animated Short Subject nod for “What’s Opera, Doc?”. The Oscars did, however, nominate two other Looney Tunes shorts that year; Speedy Gonzales’ “Tabasco Road”, and the winner in that category, the Sylvester and Tweety vehicle “Birds Anonymous”. Chuck Jones would have to wait eight more years before winning in this category for “The Dot and the Line”.*

Prior Viewing: If you want to see where the Bugs/Fudd rivalry began, check out 1940’s “A Wild Hare”. It’s all there, from Bugs’ first “What’s up, doc?” to Elmer’s first “Be vewy vewy quiet.”