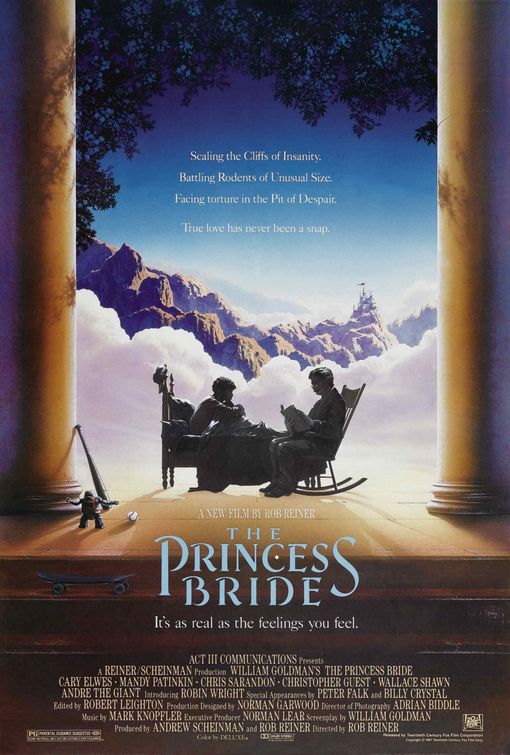 OR “Build Me Up, Buttercup”

Written by William Goldman. Based on the novel by S. Morgenstern.

The Plot: As told by a grandfather (Peter Falk) to his sick grandson (Fred Savage), “The Princess Bride” is a romantic fairy tale about the beautiful Buttercup (Robin Wright) and her love for farm boy Westley (Cary Elwes). When pirates break them apart, Buttercup becomes engaged to the evil Prince Humperdinck (Chris Sarandon) and is kidnapped by a trio of bandits (Wallace Shawn, Mandy Patinkin & Andre the Giant). There’s swordplay, wordplay, magic and yes, a few kissing parts.

Why It Matters: The NFR calls the film “one of the decade’s most beloved…feel-good movies”. And then, like a true “Princess Bride” fan, they just keep quoting the film.

But Does It Really?: This is one of those great “something for everyone” films. It’s romantic, and adventurous, and funny in just the right amounts. The film skewers classic tropes in just the right places, and is perfect homage without ever becoming spoof. Films like these always look simple, but are actually quite difficult to pull off. Reiner, Goldman, and the entire team not only accomplish this, but also create a classic that holds its own alongside the real thing.

Everybody Gets One: Broadway legend Mandy Patinkin, future TV star Fred Savage, British comedians Peter Cook and Mel Smith, and Andre the Giant, possibly the only professional wrestler on the Registry. And although this is Cary Elwes’ only film on the registry, I suspect they’ll put “Glory” on here sooner or later.

Wow, That’s Dated: A soundtrack performed almost entirely on keyboards is the film’s most ‘80s quality.

Title Track: Peter Falk says the name of the book only once at the very beginning.

Seriously, Oscars?: “The Princess Bride” received one Academy Award nomination; Best Original Song for “Storybook Love”. The song is buried in the second half of the credits and is easily the least awards-worthy aspect of the entire film. “Storybook Love” got its forgettable butt handed to it by the category’s winner; “(I’ve Had) The Time of My Life” from “Dirty Dancing”.