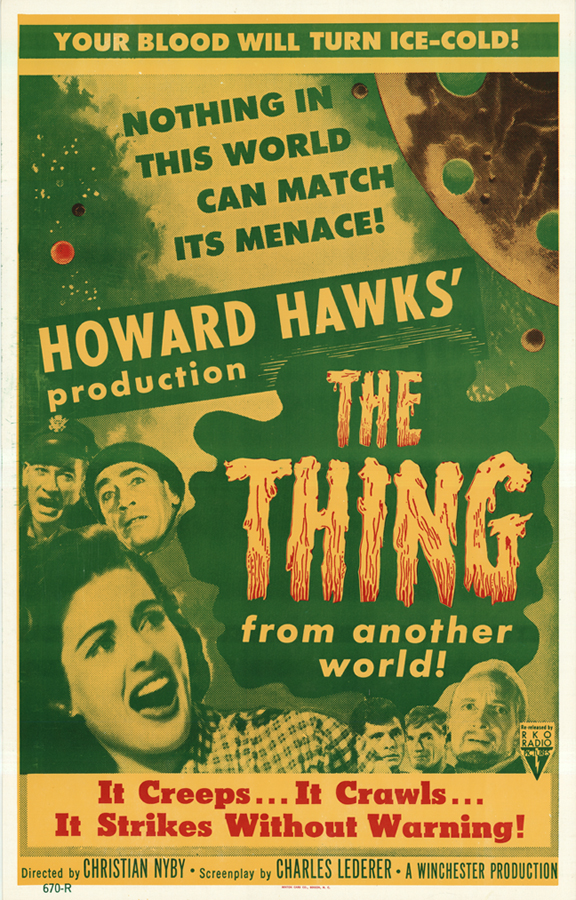 OR “When Directors Collide”

Directed by Christian Nyby (According to the credits. We’ll get to that later)

Written by Charles Lederer. Based on the novella “Who Goes There?” by John W. Campbell.

The Plot: Investigating a crash in the North Pole, a US Air Force team discovers a flying saucer under the ice. The only surviving remnant is an alien (James Arness) frozen in a block of ice. While debating whether or not to thaw the alien, one of the crew accidentally puts an electric blanket on the ice and the alien escapes. When it is revealed that the alien can regenerate, a debate escalates between Captain Hendry (Kenneth Tobey) and Dr. Carrington (Robert Cornthwaite) over whether to kill the alien or not. With below freezing temperatures and a killer on the loose, time is running out for the crew.

Why It Matters: The NFR praises the film’s “strong narrative and well-defined characters”, and also stands staunchly on the “Team Hawks” side of this film’s director debate.

But Does It Really?: It can’t beat the John Carpenter remake, but the original is quite suspenseful in its own right. The film takes a piece of well-written science fiction and turns it into a taut, thrilling film. Its influence can still be felt by any horror movie keeping the costs down with one set. Kudos to the director, whoever it may be.

Shout Outs: McPherson knows how to handle a gun thanks to “Gary Cooper in ‘Sergeant York’”, which was (also?) directed by Howard Hawks.

Everybody Gets One: Most of the cast, notably James “Marshall Dillon” Arness, who allegedly hated being in this film. And if they put you in a rubber suit and set you on fire you’d hate it too.

Wow, That’s Dated: Several references to the war and the atomic age. My favorites are shout-outs to current President Truman and the old phrase “that’s the $64 question”. Adjusted for inflation, that question is currently worth $188.86.

Seriously, Oscars?: Like its fellow 1951 sci-fi classic “The Day the Earth Stood Still”, “The Thing From Another World” received no Oscar nominations.