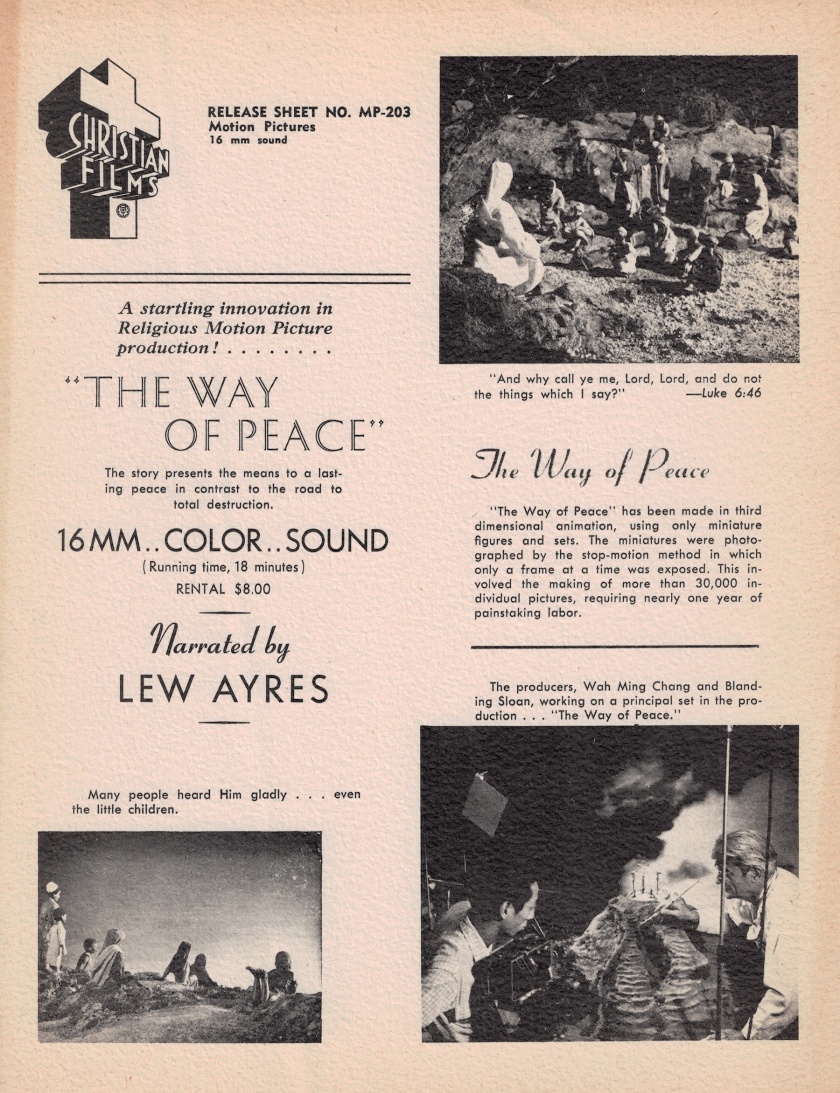 The Plot: Funded by the Lutheran Church and narrated by Lew Ayres, “The Way of Peace” is a stop-motion tale about the dangers of non-belief in our modern (‘40s) world. After a whirlwind CliffsNotes version of the Bible (both Old and New Testament), we are warned that turning away from God and His message will lead to mankind’s destruction, as demonstrated by a lot of miniature sets being blown up.

Why It Matters: The NFR describes the film’s history and undertaking, but cites no specific reason why the film has been chosen for preservation. A much more detailed look at the film can be found in this article by Mark Quigley of UCLA’s Film Archive (who, not so coincidentally, recently restored this film).

But Does It Really?: The aforementioned article helps a bit, and I can give this film a pass on historical merit. If you’re willing to overlook the film’s (obvious and intentional) heavy-handedness, at its core is a plea to stop killing each other, from a generation that had just survived yet another war to end all wars. Sadly, 70 years later, we still need the reminder.

Everybody Gets One: While not his only NFR entry (see “Legacy” below), we’ll give a quick shout-out to director Frank Tashlin. An animator for practically every major studio in the ‘30s, Tashlin finally landed at Warner Bros., helming many of their shorts, including the infamous “Private Snafu” shorts during World War II. Artist and sculptor Wah Ming Chang produced “The Way of Peace” through his business venture, The East-West Film Company. Among his many accomplishments over the years are the communicators used on the original “Star Trek” series.

Take a Shot: As if they knew that 70 years later some yahoo would try to turn this into a drinking game, the phrase “the way of peace” pops up frequently in this 18 minute short. I’m pretty sure at one point Lew Ayres says it twice in the same sentence.

Seriously, Oscars?: No Animated Short nomination for “The Way of Peace”. The winner that year was “Tweetie Pie”, the first Merrie Melodies cartoon to pair Sylvester with Tweetie.