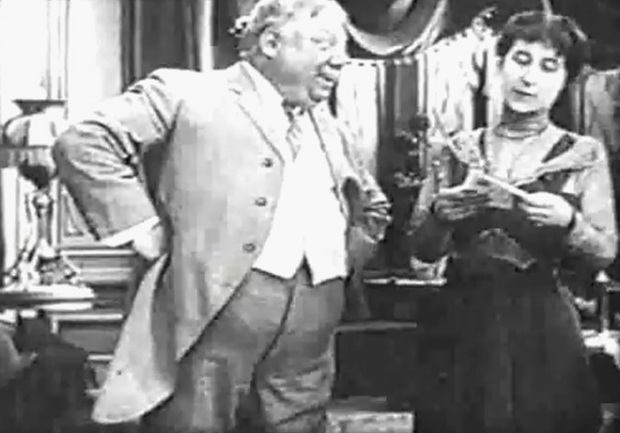 OR “Bunny’s Stake Is Missing”

The Plot: Bunny Sharpe (John Bunny) has a gambling problem, and when his wife (Flora Finch) pleads with him to stop, he vows never to play poker with the boys again. Later, his wife finds out that he’s still going to his weekly poker games in the guise of a fraternal meeting. She gets her cousin Freddie (Harry T. Morey) and his bible study group to infiltrate the club dressed as police officers. Hilarity ensues.

Why It Matters: The NFR gives the film its historical significance, and then devotes a lot of the write-up to a New York Times editorial calling for film preservation after Bunny’s death in 1915. Yeah, we get it; it’s prescient. An essay by go-to silent film expert Steve Massa provides more insight into Bunny and Finch, but is weirdly cut off at the end.

But Does It Really?: Oh sure. It’s not a masterpiece or a laugh riot, but it’s one of the rare surviving pieces of film depicting one of America’s earliest silent comedy duos.

Everybody Gets One: John Bunny and Flora Finch will show up elsewhere on this list, but this film is their only moment in the spotlight. Both were stage actors who made the transition to film with Vitagraph in the early 1910s. Despite their alleged dislike for each other, their films together (affectionately known as “Bunnyfinches”) were Vitagraph’s most popular shorts.