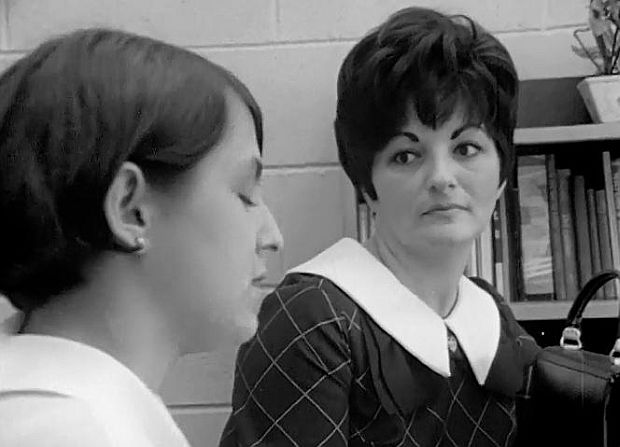 OR “Most Likely to Impede”

No trailer, but here’s an excerpt.

The Plot: Following his documentary on a state facility for the criminally insane (1967’s “Titicut Follies”), Frederick Wiseman chose a logical follow-up for his second film: high school. Philadelphia’s Northeast High School is the subject of this documentary, as the camera goes from class to class and observes our education system in full swing. Is this faculty molding my parents’ generation strongly enough for the future? Are they bogging them down with too much discipline? It’s direct cinema, so that’s your call.

Why It Matters: The NFR gives a general overview and quotes Richard Schickel’s review, which called the film a “wicked, brilliant documentary”. There’s a thought-provoking essay by Canadian film professor Keith Grant, which focuses on the film’s theme of conformity, but manages to misspell “principal” as “principle”. So close.

But Does It Really?: If you ever went to high school, this film is going to strike a chord with you. As with many of Wiseman’s film, this is “direct cinema”: no commentary from the filmmaker, you fill in your own blanks. Like any documentary, “High School” has obviously been edited to create a certain narrative flow that didn’t exist in the raw footage, but even that is open to interpretation. I enjoyed the film a lot as both a time capsule of a moment in America and as a checkpoint for how far (or not) high school has evolved in the last 50 years. Definitely worth a watch.

Everybody Gets One: We’ll see more of Frederick Wiseman when I cover his follow-up film “Hospital”. This film’s cinematographer is Richard Leiterman, who started off filming stock footage for the CBC before filming several Canadian documentaries. Among his later work is the original TV movie version of “It”.

Wow, That’s Dated: Filmed in the spring of 1968, “High School” comments on such topical issues as Vietnam, the MLK assassination, the ongoing space race, and the debate over miniskirts as formal wear. Plus you get this peppy little tune from bubblegum group 1910 Fruitgum Company.

Seriously, Oscars?: No Best Documentary nod for “High School”. That year the winner was the inspirational “Young Americans” “Journey Into Self”. None of Frederick Wiseman’s documentaries were ever nominated for an Oscar. Wiseman did, however, eventually win a lifetime achievement Oscar in 2016.

Listen to This: Amazingly, Otis Redding’s rendition of “(Sittin’ On) The Dock of the Bay” is nowhere to be found on the National Recording Registry. The song is, however, included on the Registry by way of The Staple Singers’ cover. Otis Redding appears on the list thanks to his performance of “I’ve Been Loving You Too Long (To Stop Now)”.