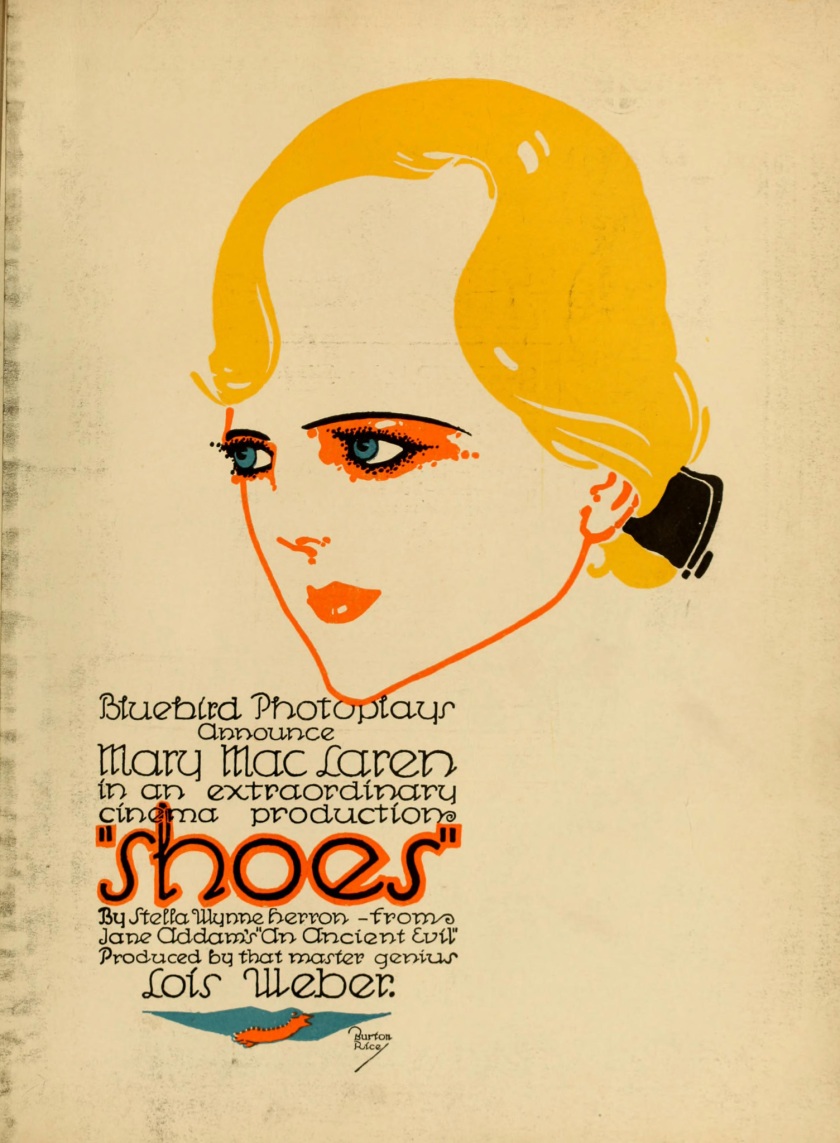 OR “The Agony of the Feet”

Directed & Written by Lois Weber. Based on the short story by Stella Wynne Herron, and the novel “A New Conscience and an Ancient Evil” by Jane Addams.

No trailer, but here’s a clip

The Plot: Eva (Mary McLaren) is a poor shop girl who works to support her parents and siblings. She tries to save up money for a much-needed new pair of shoes, but her paycheck always ends up going to back rent or debts owed to local businesses. Day after day of standing on her feet and walking through the rain has made Eva’s current shoes damaged beyond repair, but a proposition from “Cabaret” Charlie (William V. Mong) might solve her problems. How much is Eva willing to do for a pair of…shoes?

Why It Matters: The NFR calls the film “a masterfully crafted melodrama” and praises Lois Weber to the hilt. There’s also a detailed essay by film professor/Lois Weber expert Shelley Stamp.

But Does It Really?: Sure, “Shoes” is preachy and its pacing is glacially slow by today’s standards, but it represents one of Hollywood’s few female directors, as well as a prominent social issue of the day. We have another Lois Weber movie on the list – 1916’s “Where Are My Children?” – but given her limited surviving filmography, as well as her importance to the early days of Hollywood, there’s plenty of room on this list for another well-made morally-strong Lois Weber film.

Everybody Gets One: Born to a family of evangelical Christians, Lois Weber was a child prodigy on the piano, and quickly turned to performing. Weber and her husband, Phillips Smalley, found work at the Rex Motion Picture Company in New York, which merged with several studios in 1912 to become Universal Studios. Following a move to Hollywood, Weber found herself directing, writing, and acting in her own movies. With this level of creative control, Lois Weber felt that movies were “an outlet for my emotions and my ideals”. “Shoes” was influenced by Weber’s days as a missionary on the streets of New York, and the poverty-stricken living conditions she witnessed.

Wow, That’s Dated: “Shoes” is firmly steeped in its 1910s Progressive Era setting, but there’s still a lot of the film’s depiction of living below the poverty line that rings true today. Also dated: Five and Dime stores where items actually cost five and ten cents.