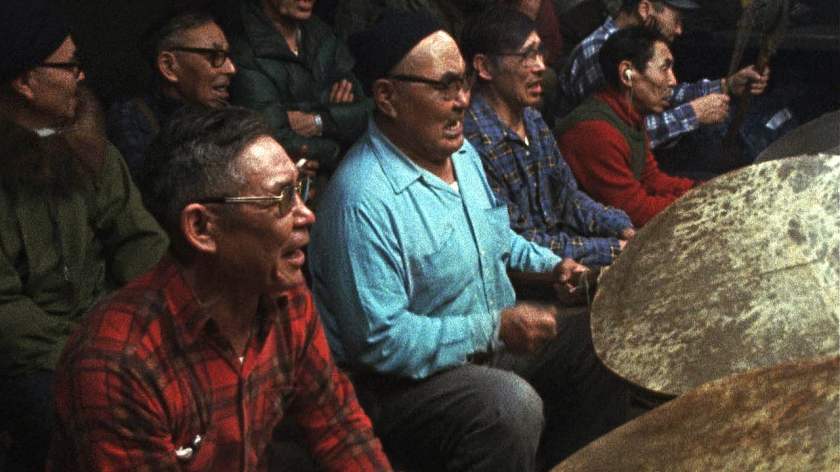 The Plot: “Drums of Winter” chronicles the Yup’ik, an indigenous people in the small town of Emmonak, Alaska, specifically the traditional Yuraq dances during their potlatch ceremonies. In their trademark collaborative film style, Elder and Kamerling let their subjects describe their own lives and customs without interference from either of the directors. The types of Yup’ik dances are discussed and showcased, as is the history of these dances being banned by American missionaries, to the point of near extinction. Through the power of film, and the oral history of the Yup’ik, these dances survive.

Why It Matters: The NFR gives a brief rundown and description of the Yup’ik. The only superlative given to the film itself is that it is “beautiful”.

But Does It Really?: Within minutes of my viewing I knew why “Drums of Winter” was inducted into the NFR: by preserving this film, they are preserving a culture. In addition, “Drums of Winter” represents Sarah Elder and Leonard Kamerling, two filmmakers who have spent their lives chronicling the Alaskan people and their evolving culture. “Drums of Winter” is an engaging glimpse at an oft-ignored culture, and I’m glad the NFR has chosen to preserve and highlight this film.

Everybody Gets One: Sarah Elder and Leonard Kamerling spent most of the ‘70s and ‘80s making documentaries about various Native Alaskan cultures, and the hardships they endured to keep their traditions free from outside influences. The two filmmakers had a unique approach to their films, in that the subjects themselves had a creative say in what was presented (and how) in the final film. Other Elder/Kamerling/Native Alaskan collaborations include “At the Time of Whaling” and “On the Spring Ice”, both chronicling another Yup’ik community on St. Lawrence Island.

Wow, That’s Dated: The bulk of this movie was shot in 1977, and even citizens on a remote Alaskan coastline have those brown lens prescription glasses I associate with the late ‘70s.

Seriously, Oscars?: “Drums of Winter” played the festival circuit, so I don’t know if it ever got an Oscar qualifying run. The 1989 Best Documentary winner was the Ron Epstein and Bill Couturié classic “Common Threads: Stories from the Quilt”. None of Elder and Kamering’s documentaries have received any Oscar love.