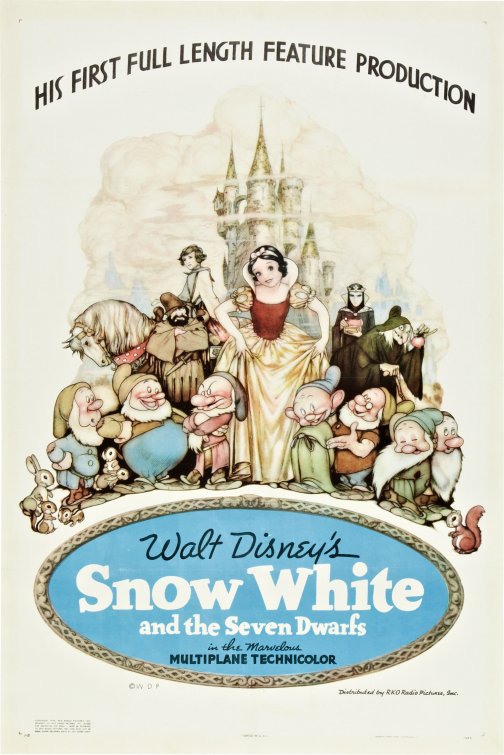 OR “The Original Magnificent Seven”

The Plot: Once Upon a Time, the princess Snow White (voiced by Adriana Caselotti) is the fairest in the land, and this does not go over well with her evil stepmother the Queen (voiced by Lucille La Verne). After a botched assassination attempt, Snow White flees into the forest and comes across the home of seven dwarfs (voiced by Roy Atwell, Pinto Colvig, Billy Gilbert, Otis Harlan, & Scotty Mattraw). The kind little men take her in, but the Queen finds out and has one last poisoned apple up her sleeve.

Why It Matters: The NFR calls it “[a] virtual watercolor painting come to life” and says that the animation’s details “never fail to amaze”. There’s also an historical essay by Disney animation expert J.B. Kaufman. “Snow White” is the first animated film to make the National Film Registry.

But Does It Really?: This is about as perfect as animation gets. “Snow White” is an ideal choice for Disney’s first animated feature. A few technical gaffes aside, the film is visually striking as well as having a wonderful story that embellishes and enhances the original fairy tale. A pillar upon which so much filmmaking has been built, “Snow White and the Seven Dwarfs” is untouchable in my book, and an obvious choice for the NFR’s first 25 films.

Everybody Gets One: Adriana Caselotti was 20 years old and already a trained opera singer when she recorded “Snow White”. Walt kept her under a strict contract to ensure her unique voice wouldn’t appear in other movies, spoiling the illusion. Caselotti’s film career ended before it started, but she lived to be 80 years old, spending the rest of her life as essentially Disney’s Norma Desmond.

Wow, That’s Dated: Grumpy’s open sexism probably wouldn’t fly today. In addition: jury’s still out on if they are referring to the mythical, Tolkein versions of dwarfs or anyone with dwarfism.

Seriously, Oscars?: Because it received a limited release in December 1937, “Snow White” was eligible for the 1937 Oscars, receiving one nomination: Best Music Score. The film lost to “One Hundred Men and a Girl” (Don’t ask). After the film’s nationwide success in 1938, the Academy chose to give Walt Disney an honorary Oscar the following year. For this special achievement, Walt received one Oscar, and seven miniature ones.

Legacy: There’s a lot I want to say about the legacy of “Snow White”, but it’s too much for one post. To Be Continued!

Further Viewing: Walt saw this 1916 silent version of “Snow White” as a young boy and never forgot it. The influence this film had on Walt’s version is pretty astonishing.